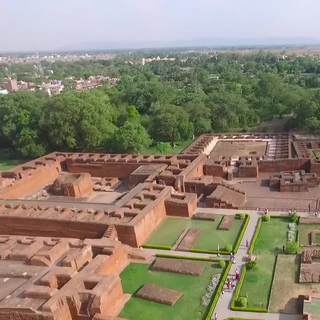 An excellent film made by ASI about the great Buddhist monastery that flourished in India from around the 5th-12th centuries.

This is an excellent short film by the Archeological Survey on India (ASI) looking at the extensive remains of the Nalanda Mahavihara, situated south of Patna in Bihar, India.

Nalanda is the most famous of the many large-scale Buddhist universities in India that flourished during the Middle Ages from around the 5th-12th centuries AD.

The film itself gives new insights into the archeology and planning of the site by making extensive use of drone footage, which enables one to get an overview of the large site.

The film also features old photography from the original excavations made at the site, and is produced in high definition format, which is crystal clear, and marks a real upgrade from the low-definition materials previously made about the site.