A look at Zen training at the Japanese Rinzai School of Zen Buddhism Shogen ji Monastery in Shimizu-ku, Shizuoka, Japan. 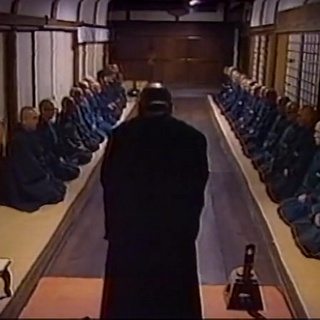 This is a film made in 1994 by NHK about the very strict training practice that is found in certain Zen monasteries in Japan. The one featured here is the Shogen ji Monastery in Shimizu-ku.

The film roughly follows an aspirant as he comes to the door of the monastery and seeks entrance, a process which may take some days.

It shows the sorts of practices expected in the monastery, including sitting meditation practice and ko’an interviews between master and student.

It especially focuses on the Rahatsu sesshin period in which, for eight days in the dead of winter, the monks exert themselves at their very best trying to achieve satori, or a form of enlightenment.

Along the way we are introduced to the spirit of Zen, which is simple, austere, strict and focused, and we learn something about the history of the school and of the temple itself.