A mystery story set in the rugged landscapes of Tibet (Tibetan with English Subtitles). 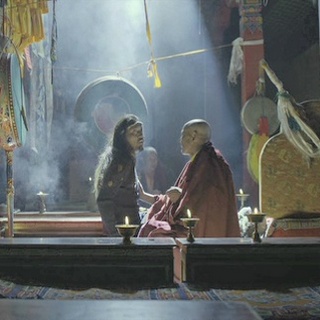 This is a very engaging mystery story from Zhang Yang, who also brought you Paths of the Soul recently. It has a rather simple storyline: a hunter finds a precious jewel in the mouth of a deer he has just killed and is almost immediately struck and killed by lightning. His body is taken to the local monastery where he is revived by a rinpoche (incarnate lama), and is told his bad kammic deeds can be purified by taking the jewel to the Buddha’s sacred Palm Print Mountain.

The mission is complicated by a blood feud he has with two brothers who seek to kill him, a woman and child seeking refuge with him, and mercenaries who want to steal the jewel. A character who looks on from afar turns out to be the author who doesn’t know how to bring his story to a conclusion.

So much for the story, but it is as much the spectacular scenery of Tibet it is played out in that makes the film, and the superb photography throughout. It is supported by a good cast who go beyond acting, and good direction from an observant director. The film lingers over the landscape as much as over the characters it brings to life, and provides a contemplative, and quite unforgettable experience.

The film was released in 2016 and is based on two short stories by Tashi Dawa.