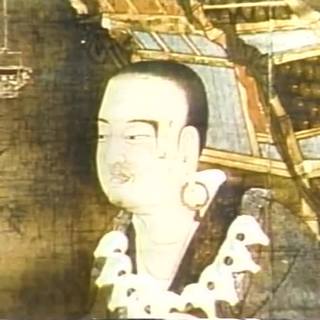 The expedition team crosses into India proper, and down the Ganges Basin, following in the footsteps of China's most famous pilgrim, Xuang Zang.

The expedition team, which had started off in China’s ancient capital Chang’an around a year previously, now crosses into India proper, and down the Ganges Basin, following in the footsteps of China’s most famous pilgrim, Xuanzang.

As always the documentary looks at the historical sites in its story, and also at latter-day culture, which in this case includes a quick visit to the Taj Mahal, and a longer look at the 1991 Kumbha Mela in Allahabad, where they meet a living goddess.

For Buddhists the interest lies in seeing the Dalai Lama teaching in Sarnath, to just a few scores of monks; the visit to Bodhgaya, which in 1980 had a much less developed Temple; and a look at Nalanda where Xuanzang lived and studied for 5 years. At the time the film was shot they seem to have still been reconstructing the Sariputta Stupa.

This is the last part which concentrates on Buddhist sites, there are in fact another 14 parts to the series, but they now enter the western reaches of the Silk Road.

They are interesting enough but this site concentrates on Buddhism and its cultures, so I will not be posting any more from the series. Those who want to see the rest can follow up from this playlist.