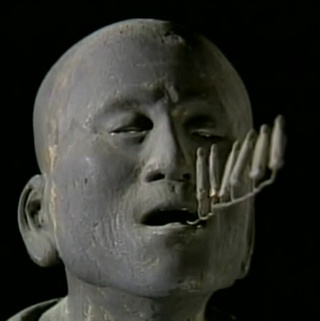 A look at the Kamakura period in Japan and the changes that its art works underwent at that time.

This is another film in the series Japan Spirit and Form that I am showing. It was made by NHK in 1989 and it presented by Schuichi Kato.

This one centres around the Kamakura period in Japanese history (12th-14th centuries), and around the introduction of the Pure Land sect from China, and the transformation in Buddhism that came along with it, as the more austere teachings of Buddhism gave way to the popular belief in a saviour.

Despite the title, the programme also covers Zen Buddhism and its artifacts, and, as in other films in the series, quite some time is spent looking at developments in art in other cultures too, which are sometimes parallel, sometimes contrasting.

A large part of the film is spend looking at statues of famous monks that were made at the time, and analysing the famous statue of Saint Kuya, in which the 6-syllable Amitabha mantra takes the form of six Buddhas emerging from his mouth.