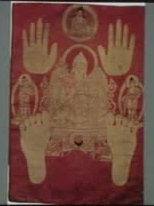 This lecture was part of the Eternal Ancestors series given at the Metropolitan Museum in New York City in 2008.

Most of the talks in the series – and the focus of the exhibition accompanying it – was on African art.

But in this lecture Denise Patry Leidy discussed the role of the reliquary in Buddhist culture.

The reliquary idea began when the remains of the historical Buddha were placed in eight different stupas in the Middle Country.

Later King Asoka dug these up, and redivided the remains and placed them inside the supposed 84,000 temples he founded throughout his empire.

Not only bodily relics, but other types of relics were also important, like articles which had a close association with the person being commemorated.

From the beginning the idea of preserving the bodily relics of other saints was also practiced, which is continued up to the present day.

In a short span Leidy does a good job of explaining some of the scope and importance the reliquary has played in Buddhist culture.

The video recording is, unfortunately in lo-fi, but for the information the lecture contains it is worth while putting up with it.