A record of a remarkable 2,000km+ pilgrimage made by a handful of peasants from Sichuan to Lhasa in 2006-7 (Korean with English subtitles). 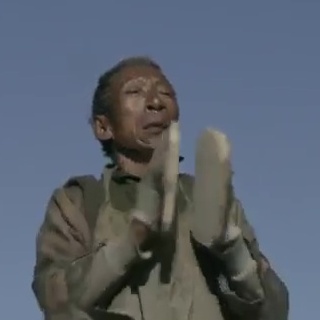 This is a record by the Korean Broadcasting System of a remarkable 2,000km+ pilgrimage made by a handful of peasants from Sichuan in China to Lhasa in 2006-7. Not only did they walk the whole way, but every few steps they stopped to prostrate.

Earlier in the year I published a similar film made by Zhang Yang covering the same subject: Paths of the Soul. Remarkable as that film was it was only semi-documentary, this one, on the other hand, is a straight document of a real-life journey.

Five pilgrims go on the journey, two of whom pull the carts of supplies needed to keep the group alive, and three of whom do the prostrations along the way.

It would be an extreme understatement to say the journey is tough – it is almost unimaginably difficult – and how they manage to keep going when nutrition is so poor, and terrain so hard I cannot imagine.

But keep going they do, even when one of the older members is on the verge of death, rather than turn back they take it as an honourable way to die, as indeed it is.

But this is only part of the wonder of this film, you really have to watch it to the end before it is revealed why they are undertaking such an arduous journey. One can only hope that their aspirations are fulfilled.